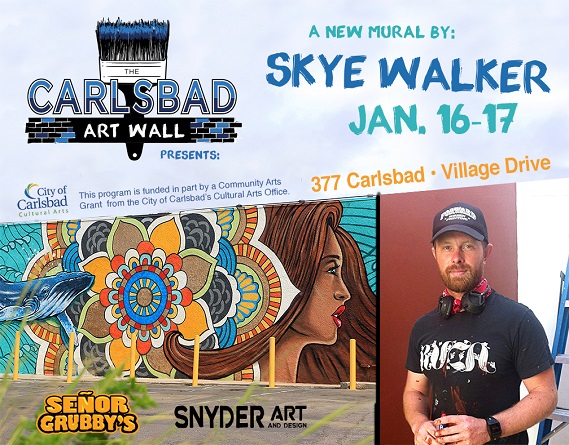 The Carlsbad Art Wall (CAW) project begins its 2nd season in 2016 under a partial funding City of Carlsbad Community Arts Grant. Encinitas muralist Skye Walker kicks off the CAW season on Saturday, January 16, 2016 at Señor Grubby’s in the Carlsbad Village. Mural to be completed Sunday, January 17.

In 2015, the east facing exterior wall of Señor Grubby’s rotated through 5 different CAW murals—each painted by a new Los Angeles street artist. Each artist was curated by Carlsbad village based artist Bryan Snyder with the goal of introducing new urban art to the Carlsbad community, as well as providing an educational setting for aspiring urban artists.

Snyder plans on continuing the rotation of artists every two months like he curated in 2015. Differences in 2016 include involving local artists in the rotation. In addition, Snyder will host an urban art workshop for teens prior to each new mural through a community collaboration with the Carlsbad Boys and Girls Club.

“2015 introduced Carlsbad to some amazing visiting Los Angeles talents,” Snyder said. “I am very excited to open up the wall to local artists too, and use the CAW urban canvas as an urban classroom environment where I will teach teens from the Boys and Girls Club some basic drawing skills in the urban public space—think Mark Kistler street art!”

The first 2016 CAW artist Skye Walker will bring his life-long love for illustration, design and mural painting to the CAW with his signature colorful composition of nature and environmentally conscious iconography. Walker found his love for art in his early youth while traveling the country with the family bluegrass band named EarthWalkers. They logged over 2,000 shows nationwide singing about preserving the environment. During this time, Walker’s father taught him the art of lettering and murals. His father was an accomplished sign painter and muralist in the 70’s and 80’s.

Walker’s early art talents earned him a four-year scholarship to Oregon State University in route to a BFA in graphic design. Walker’s art career has taken him to professional collaborations with many companies including: Rip Curl, Redsand, prAna, Dragon and Nike, as well a commercial murals for Whole Foods and the California Coast Credit Union.