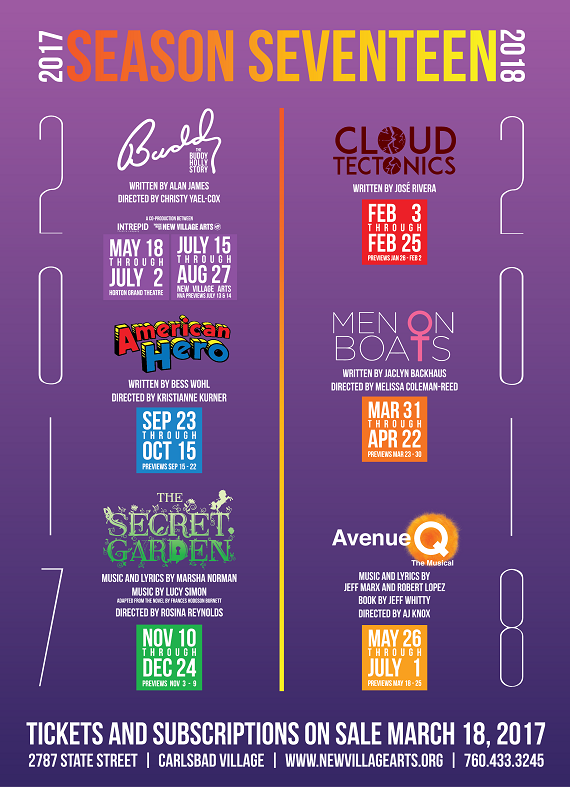 MUSIC, TEAMWORK, FAMILY, LOVE, ADVENTURE, INCLUSION.  After a year examining the American Experience, in what turned out to be one of the most tumultuous and combative years in recent history, New Village Arts is pleased to announce its 17th season that will focus on plays that explore moments that bring people together. In this divisive climate, NVA will delve into how to build its village: through stories that examine the things we all have in common.

The season kicks-off with a co-production with Intrepid Theatre Company of BUDDY: THE BUDDY HOLLY STORY, written by Alan James. Celebrating the life and music of Buddy Holly and his contemporaries, this award-winning musical illustrates how music can bring diverse people together. BUDDY will be directed by Intrepid’s Producing Artistic Director, Christy Yael-Cox, and will run for six weeks at the Horton Grand Theatre in the Gaslamp District before transferring to the NVA stage for an additional six-week run.

NVA’s Executive Artistic Director Kristianne Kurner will take the helm for the next show, the San Diego professional theatre premiere of Bess Wohl’s AMERICAN HERO. This modern and timely comedy follows the employees of a newly-franchised submarine sandwich shop. When corporate America gives up on them, they take things into their own hands, using hard work and ingenuity to come together, proving that heroes aren’t born--they’re made.

For the holidays, NVA will bring a beloved, classic story to life with the musical THE SECRET GARDEN. This enchanting tale will be directed by the incomparable Rosina Reynolds and celebrates the power of family -- both the one you are born into and the one you make for yourself. It’s a redemptive story of a young girl finding her voice, and the adults around her discovering the bravery in letting go of the past. Lucy Simon and Marsha Norman created this Tony-winning musical that is sure to delight audiences of all ages for the holidays.

2018 will start with the magical realism of Jose Rivera’s CLOUD TECTONICS. NVA will announce the director of this production soon, and Nadia Guevara will be featured as Celestina del Sol. This unforgettable play examines how love affects time and how time affects love, and how the elemental forces around us truly shape who we become. The play will be part of NVA’s new bilingual Teatro Nuevo Pueblo initiative and include many surround events.

Up next, NVA will take its patrons on a grand adventure with the Regional Premiere of Jaclyn Backhaus’ MEN ON BOATS. This fantastical comedy recreates John Wesley Powell’s ten-man 1869 exploratory expedition into the Grand Canyon with one twist: all of the roles are played by women. The production will be directed by Melissa Coleman-Reed (who is directing NVA’s HAVING OUR SAY for Season Sixteen), featuring Kristianne Kurner as John Wesley Powell, and showcasing a diverse group of San Diego’s finest female actors.

The season will conclude with another big musical, AVENUE Q, in celebration of how community brings people of all types together. This unique and hysterical musical follows a puppet named Princeton as he moves into a new neighborhood and explores the diversity around him. The denizens of Avenue Q are a far cry from the wholesome puppets of Sesame Street, but these humans, puppets, and monsters all share one thing in common: their lives may suck, but not when they’re together. NVA’s Director of Connectivity, AJ Knox, will bring this comedy to life.

These six productions all explore those elements of life that bring us together as a community: music, teamwork, family, love, adventure, and inclusion. NVA hopes that this diverse line-up will enable people to go on unique journeys that leave them thoughtful, inspired and feeling “slightly more alive” than when they entered the theatre.

Managing Director Alex Goodman and the NVA team have also continued their work towards gender parity on stage, with an equal number of male and female playwrights and a majority of female directors.

Tickets and subscriptions will go on sale on Saturday, March 18 at 3pm. New Village Arts will also be hosting an Open House at that time, where patrons can enjoy refreshments, learn more about the upcoming season, tour the theatre, and purchase or renew subscriptions.