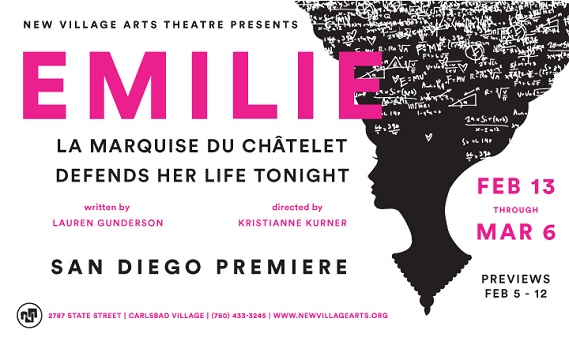 La Marquise du Châtelet was a mathematician, a physicist and the toast of the Enlightenment. So why then is the Marquise not better known? Like so many important women in history, her contributions have often been attributed to her male contemporaries, while her story remains largely forgotten. Now, Emilie: La Marquise du Châtelet Defends Her Life Tonight, the brilliant play from award-winning playwright Lauren Gunderson, resurrects this fascinating personality and draws Emilie once more into the light. Brought back from the dead, Emilie is determined to answer the questions that haunted her dying moments on Earth: "Was I right?" and "Was I loved?" As she travels back in time to revisit key moments in her scientific and emotional journeys, the full extent of her remarkably prescient legacy is revealed in this smart, surprising and sexy portrait of a true genius.

NVA's Co-Founder and Executive Artistic Director Kristianne Kurner is helming the production, with Jo Anne Glover playing the title role.  Ms. Glover is currently nominated for a San Diego Theatre Critics Circle Award, is one of the founding members of Moxie Theatre, and is one of the most respected actors in San Diego. Taking on the role of Voltaire is Equity Actor Skyler Sullivan, who is relatively new to San Diego. He most recently portrayed Abraham Lincoln in Diversionary Theatre's Civil War Christmas. The other three actors: Dagmar Fields, Christina Flynn and Zackary Bonin, play multiple roles throughout the show, including Newton and Madam Graffigny.