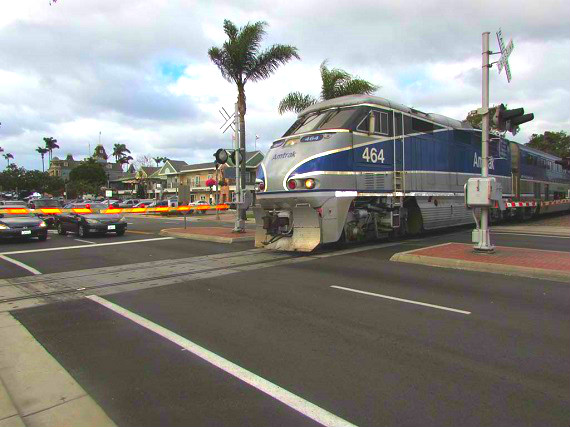 A new study shows that lowering the train tracks below street level between Carlsbad’s two northernmost lagoons would significantly increase safety, benefit local businesses and residents, reduce train noise and improve traffic flow, but would cost significantly more than keeping the tracks where they are.

The San Diego Association of Governments, the regional agency in charge of making improvements to transportation infrastructure, is building a second set of train tracks along the entire north-south rail corridor in San Diego. The $1 billion project is needed to accommodate the increasing reliance on trains for passenger travel and the movement of cargo.

The project is part of a multibillion dollar effort to improve rail service between San Diego and San Luis Obispo. In addition to the “double tracking,” improvements include replacing and upgrading older bridges and tracks and other safety and operational improvements.

What This Means for Carlsbad

In Carlsbad, the railroad tracks are mostly at the same level as the street. A second set of tracks has already been installed between Pine Avenue and the Agua Hedionda Lagoon.

According to the study, building a second set of tracks is more complicated in the northern part of the city because the tracks cut through the Village and Barrio, two of Carlsbad’s oldest neighborhoods.  When second set of tracks is built, the number of trains that come through the Village and Barrio neighborhoods is expected to double from 50 to 100 trains a day.

SANDAG recently completed a study of the feasibility and economic impacts of lowering the tracks. The study showed that a below street option is feasible and would have some advantages over the existing location of the tracks, but would be much more expensive. Here’s generally how the two options compare.

Study of economic analysis and feasibility for both options

About the overall rail improvements project

What Carlsbad is doing