Thank You For Celebrating 20 Years of Art in the Village 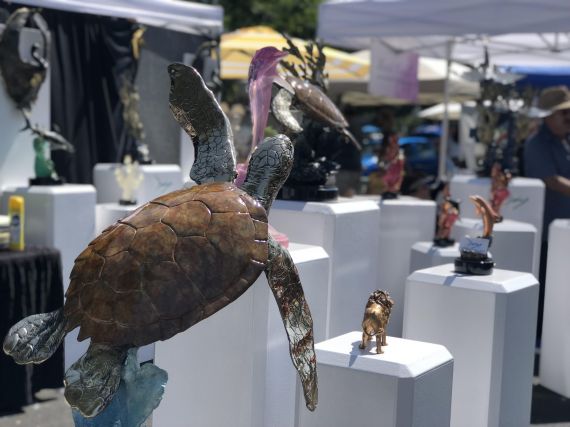 On Sunday, August 12th, over 100 artists took over Carlsbad Village along with art enthusiasts from near and far. With mediums including oil, acrylic, pottery, sculpture, glass, mixed media, fiber, jewelry, photography, and more, there was something available for everyone. CVA wants to give a special thanks to the City of Carlsbad, Mission Federal Credit Union, and Toyota of Carlsbad for helping us make this 20th-anniversary event even better than usual. The City's Family Open Studios enjoyed working with nearly 400 children in their art-making studio. It was the first time the Family Open Studios has been at Art in the Village. Another first-time attraction was the City of Carlsbad Concert in the Parks stage. Three musical acts played during the day and the cast from Legally Blonde: The Musical performed four songs. The stage area featured a seating area that came in handy on this very hot day.

Thank you to all who came out and supported the artists in Art in the Village. We look forward to seeing you again next year!