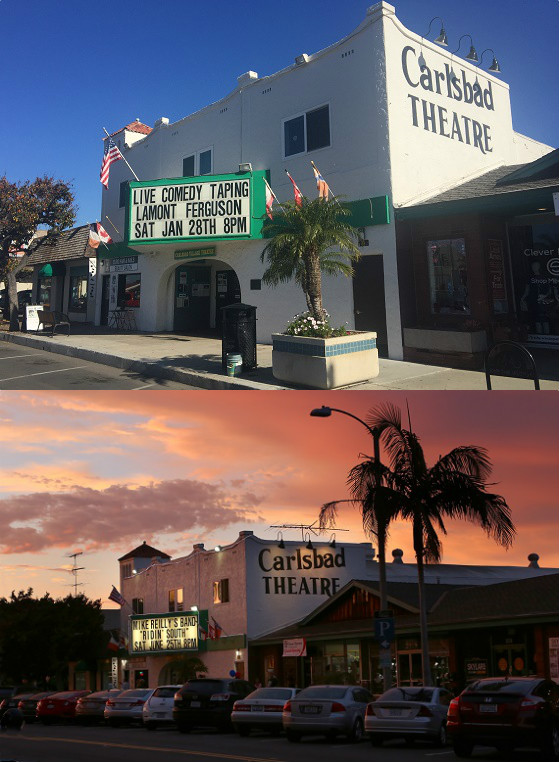 On February 8, 1927 the Carlsbad Theatre at 2822 State Street had its grand opening with the showing of the film “It” starring Clara Bow, a silent romantic comedy film that made Clara Bow a star.  The film had its world premiere in Los Angeles on January 14, 1927, followed by a New York showing on February 5, 1927, and then screened in our Village just days later.  That was 90 years ago!  The theatre featured a full stage, fly gallery, orchestra pit, pipe organ, and flyable movie screen, and reportedly up to 600 seats!  The theatre cost $40,000 to build and movie tickets were just 50 cents.

In 1939 it was renamed the “Iris Theatre” and in 1943 it was known as the “Sylvia Theatre” and then eventually the “Carlsbad Theatre.”  It has since morphed into the Carlsbad Village Theatre.  Several individuals and families have owned the theatre through the years, however, Tom and Judy McMahon have owned and operated the theatre for over two decades.  Renovated in 1999, The Carlsbad Village Theatre now serves the community as a multi-purpose entertainment venue for live stage and music performances, group meetings and large cinema screen presentations.

The Carlsbad Village Theatre features a robust schedule throughout the year and its event schedule can be viewed at www.carlsbadvillagetheatre.com.  Next time you come to the theatre to enjoy a presentation, be sure to stop and appreciate the historic plaque outside the theatre and be sure to wish it a very Happy 90th Birthday!